The printable Pacific Crest Trail maps and segment guides are provided below as a free community service by TRAILSOURCE.COM to all prospective PCT thru-hikers.

The Pacific Crest Trail, commonly known by backpackers as the PCT, is a popular 2,650 mile thru-hike from Mexico in the south to Canada in the north along the western United States. The Pacific Crest Trail is a registered National Scenic Trail that winds through scorching deserts, glacial ranges, volcanic peaks, old-growth woodlands and rainforests. The PCT is also known as the most challenging National Scenic Trail with by far the most elevation change along the route. For this reason, only about 300 hikers attempt to through hike each year starting in April.

The free printable Pacific Crest Trail maps and guides below are organized by state starting in the south at the Mexican border in southern California, and working the way north along the P.C.T. to the Canadian border in northern Washington, just as you would be thru-hiking. If you enjoy what you find below, please share this resource with other Pacific Crest Trail hikers and backpackers. 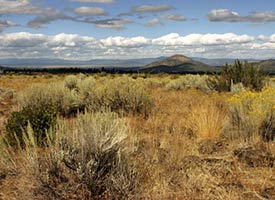 SOUTHERN CALIFORNIA
The Southern California section of the Pacific Crest Trail (PCT) is a 900 miles. The PCT begins on a low hill near Campo (elev. 2,600 feet), a small town near the Mexican border. It passes through Lake Morena County Park and beneath Interstate 8, then climbs through chaparral, scrub oaks, and pines to the rim of the Laguna Mountains. The trail dips into Anza-Borrego Desert State Park at Scissors Crossing, then winds up, down, and around the San Felipe Hills and lesser mountains of the Cleveland National Forest before crossing SR74 at 4,900 feet and climbing the backbone of the San Jacinto Mountains. It reaches its highest point in this section at 9,030 feet shortly before it plunges to its lowest, crossing beneath US10 at elev. 1,190 feet in broad San Gorgonio Pass. Click here for a full-screen, printable Southern California PCT GPS map.

From here, the PCT climbs steeply to the crest of two east/west-oriented ranges, often under welcome forest shade. It passes near Big Bear Lake and Lake Arrowhead before crossing Interstate 15 between the San Bernardino and San Gabriel Mountains at Cajon Pass near Silverwood Lake State Recreation Area. The vistas from the trail in these mountains include the Los Angeles Basin and Mojave Desert. To the west of Mt. Baden-Powell and the Angeles Crest National Scenic Byway, it descends to Highway 14 at Agua Dulce, then traverses the often brushy landscape of the Sierra Pelona. It continues north for a generally hot and dry traverse across the San Andreas Fault Zone and the western arm of the Mojave Desert before climbing into the Tehachapi Mountains where it crosses Highway 58 and enters the Sierra Nevada.

From Walker Pass (elev. 5,246'), the trail enters a road-less and wildly scenic realm, being met only occasionally by a dead-end road from the east. It hugs the relatively dry crest through the Chimney Peak Wilderness before reaching and crossing the South Fork of the Kern River near Kennedy Meadows. The route alternates between expansive meadows and conifer forests, then embarks on a 3,300' ascent and traverse to Cottonwood Pass. To the north is the majestic glaciated High Sierra. For trail users, the glaciers' most important accomplishment was the excavation of shallow basins which filled with water to create thousands of photogenic lakes and tarns, many near or above tree-line.

The best time of year to experience this section of the Pacific Crest Trail is during April, May and early June. They route is generally snow free and the desert is not too hot yet. Keep in mind that it can be difficult to find water along this section of trail. 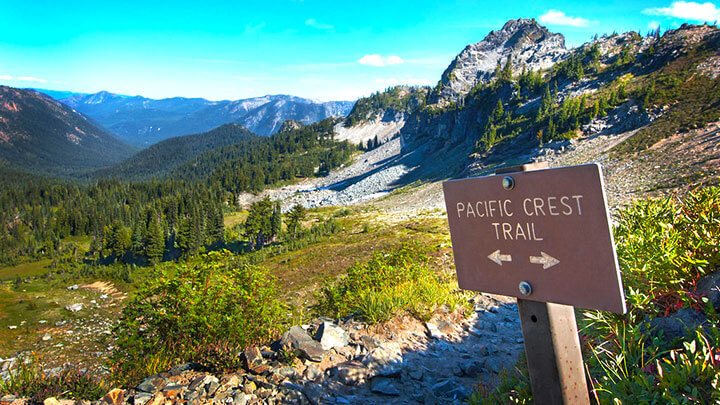 NORTHERN CALIFORNIA
The northern California section of the Pacific Crest Trail (PCT) is a stout 810 miles along ridges of glacial and volcanic peaks. From Sequoia National Park, the popular John Muir Trail descends from nearby Mt. Whitney (elev. 14,494') to join the PCT. The trails share the same tread for most of the way to Highway 120 in Yosemite National Park's lush Tuolumne Meadows (elev. 8,690'). Along this mostly wilderness stretch, the route repeatedly descends deep canyons only to ascend to high saddles. The PCT crosses eight named passes above 11,000' in this section, the first being Forester Pass (elev. 13,180'), the highest point on the entire trail. Click here for a full-screen, printable Northern California PCT GPS map.

After crossing Highway 180 at Sonora Pass (elev. 9,620'), the altitude changes diminish in amplitude, and the trail soon begins a generally sub-alpine, relatively level traverse that stays close to the Sierra crest until this section ends at Interstate 80 (elev. 7,200'). There is some volcanic rock south of Yosemite, but notable amounts are encountered from Sonora Pass to Echo Summit at Highway 50, and again near this section's end north of the Granite Chief Wilderness.

North of Donner Summit (elev. 7,200'), old volcanic flows and sediments bury most of the ancient bedrock of the Sierra Nevada crest, making travel in this section potentially dusty in late summer. Beyond the North Fork of the Feather River, the Sierra Nevada yields to the southern Cascade Range. This is prime logging country (as are most of the PCT's lands north of here), and the trail crosses many back roads. Midway through the southern Cascade Range, the PCT crosses SR89 and traverses Lassen Volcanic National Park, overseen by Lassen Peak (10,457'). Further north, the PCT follows the waterless Hat Creek Rim toward majestic Mt. Shasta.

Rather than continue north through the dry southern Cascades beyond Mt. Shasta, the PCT turns west toward greener lands, dropping to cross the Sacramento River (elev. 2,130') at Interstate 5 before entering Castle Crags State Park and the Trinity Alps. The trail reaches 7,600' elevation in the mountains connecting the inland Cascade Range with the coastal ranges, winding north through the Marble Mountains before descending to the Klamath River (elev. 1,370'). It climbs again to the crest of the Siskiyou Mountains and traverses east, entering Oregon near this section's end at Interstate 5 near Siskiyou Summit (elev. 4,310').

The best time of year to experience this section of the Pacific Crest Trail is from June to September. Keep in mind that June can still be snowy at upper elevations, but mid-July through early September is usually snow free. 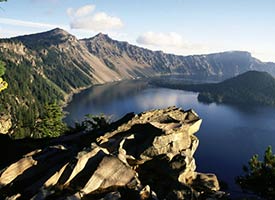 OREGON
The Oregon section of the Pacific Crest Trail (PCT) runs 430 miles across volcanic peaks and past scenic lakes. This section, from near Siskiyou Summit (elev. 4,310') in southernmost Oregon to the Washington border, is not only the shortest, but is also the easiest to hike or ride. Oregon's Cascade Range is a subdued volcanic landscape, having a gentle crest that is fairly constant in elevation. The highest point in Oregon is an unnamed saddle (elev. 7,560') north of Mt. Thielson. This, and other ancient volcanoes-Diamond Peak, Mt. Washington, and Three Finger Jack, plus recently active Mt. McLoughlin, Mt. Mazama (Crater Lake), the Three Sisters, Mt. Jefferson, and Mt. Hood - punctuate the skyline. Click here for a full-screen, printable Oregon PCT GPS map.

The trail traverses Crater Lake National Park, where a spur trail leads to the rim for a spectacular view of this magnificent lake. The PCT passes the largely unvisited small lakes and ponds of the Diamond Peak Wilderness before crossing Highway 58 near Willamette Pass. More small lakes and ponds are found in the Three Sisters Wilderness and north of Highway 20 in the Mt. Jefferson Wilderness and the adjacent Olallie Lake Scenic Area. In northern Oregon, the PCT is largely lake-free, although the trail visits or presents views of several sizable reservoirs. The Chief attraction for this northern stretch is glacier-robed Mt. Hood (elev. 11,235'), Oregon's largest and most hazardous active volcano.

The best time of year to experience this section of the Pacific Crest Trail is from July through September. The route is usually snow free during these months. But, keep in mind that there can be dense rain at times along this strech. 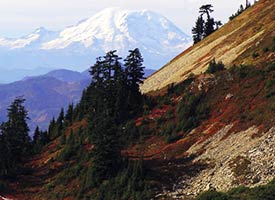 WASHINGTON
The Washington section of the Pacific Crest Trail (PCT) runs about 500 miles from Oregon up to the Canadian border. This section begins at the Bridge of the Gods (elev. 180'), on the Columbia River, and ends at Monument 78 on the Canadian border (elev. 4,240'). An additional seven miles was added beyond the border by the Canadian government to provide access to Highway 3 in British Columbia's Manning Provincial Park (elev. 3,800'). The trail begins this section with a lengthy climb out of the Columbia River gorge and eventually reaches the crest near the Indian Heaven Wilderness, a lake-blessed land abounding with huckleberries. Click here for a full-screen, printable Washington PCT GPS map.

Next it rounds the base of mammoth Mt. Adams (elev. 12,276'). Just north is the rugged dramatic Goat Rocks Wilderness, similar to the deep glaciated canyons and towering peaks of the High Sierra, and a traverse of the Packwood Glacier. The trail crosses Highway 12 at White Pass before encountering dozens of lakes in the William O. Douglas Wilderness. Between White Pass and Highway 410 at Chinook Pass, the trail skirts many lakes as it approaches the towering monarch of the Cascades, Mt. Rainier (elev. 14,410').

From the Chinook Pass the trail has an easy, rapid run to Interstate 90 at Snoqualmie Pass, which is fortunate, since this stretch presents many private land clear-cuts that offer little cover from the often present rain. The North Cascades offer challenges similar to the High Sierra of California. Here again, the PCT climbs up a deep canyon to a pass, only to descend another deep canyon and then repeat the cycle again. It traverses popular Alpine Lakes, Henry M. Jackson, and Glacier Peak Wildernesses before entering the Lake Chelan National Recreation Area, North Cascades National Park, and Pasayten Wilderness.

Just as you are approaching the Canadian border and can almost taste the cold Molson Canadian awaiting you, about 8 miles from the border is one last obstacle: Lakeview Ridge (elev. 7,126'). But after Lakeview, it's smooth trekking to the border.

The best time of year to experience this section of the Pacific Crest Trail is from August through September when the route is usually snow free.