The 8th most popular XC Ski in Switzerland.

South of Zurich and northeast of Zermatt, the Saas-Fee area has 32km of groomed cross country ski trails. The trail system passes through large forest and along the frozen Vispa River.

The car-less village of Saas-Fee is situated at 6,000 feet deep inside a valley surrounded by snow-covered peaks which soar over 13,000 feet. The thirteen glacial shrouded peaks include some of the highest in Switzerland, such as the 14,900 foot Dom. The town of Saas Fee has the quaint Swiss feel with narrow streets, wooden chalets and mostly small hotels. If you are looking for vistas, make sure to head up the gondola on Allalin mountain for spectacular views of the ice-blue glaciers with crevasses and undulating ridges.

There is another cross-country trail up in Saas-Fee. On the south side of town, it is groomed over a distance of 6 km and has an altitude difference of 154 metres. Use of this trail is free of charge.

To reach this area by train, plan to take one of the many international connections to Birg or Visp, which is south of Zurich or southeast of Bern. From Birg or Visp, transfer to the Post Bus heading to Saas-Fee. This bus will make numerous stops along the way in Saas-Grund and in Saas-Fee. Tip: If you are flying into Switzerland and planning to take the train, you may want to look into the Swiss Transfer Ticket (swisstravelsystem.ch) that is an inexpensive way to get round-trip from the airport to one ski area.

If you are looking for a rowdy, Austria-style apres ski scene, this is not the place. For the most part, the Saastal is very family-oriented, and the towns have a significant year-round local population which includes many children. There are a few places in each town that you can find some people celebrating the days runs, but you will most likely not find them dancing on the tables and doing shots. What nightlife can be found, will definitely be found after 11pm.

The apres ski scene at Saas-Fee base starts early since the sun descents below the high peaks and it gets cold fast. So, before it gets too cold (i.e. before 4pm), check out the outdoor patio of the No One Snow Bar or the heated patio of the Black Bull Bar. There are also the Derby, No. 1 Bar, Mühle, Rendezvous and Christiania. When it gets too cool to be out on the terraces, head over to the Chemi Stube in the Christiania, the Saaserhof, Nestis or the Rendezvous.

When it comes to nightlife, there are a lot of choices in Saas-Fee. For the younger under 25 crowd, there is the Go-Inn Bar, the Poison, and the Crazy Night in the Metropol, which is known for good music. The local Swiss head over to Pic Pic, and to the Happy Bar for a quieter and less expensive night. And, of course, you really need to check out the Popcorn Shop at the Hotel Dom for plenty of music and a wide variety of locals and tourists.

Overall, Saas-Fee - Saastal is the 8th most popular cross country ski area of all 22 Nordic ski destinations in Switzerland.

Where To Go Next 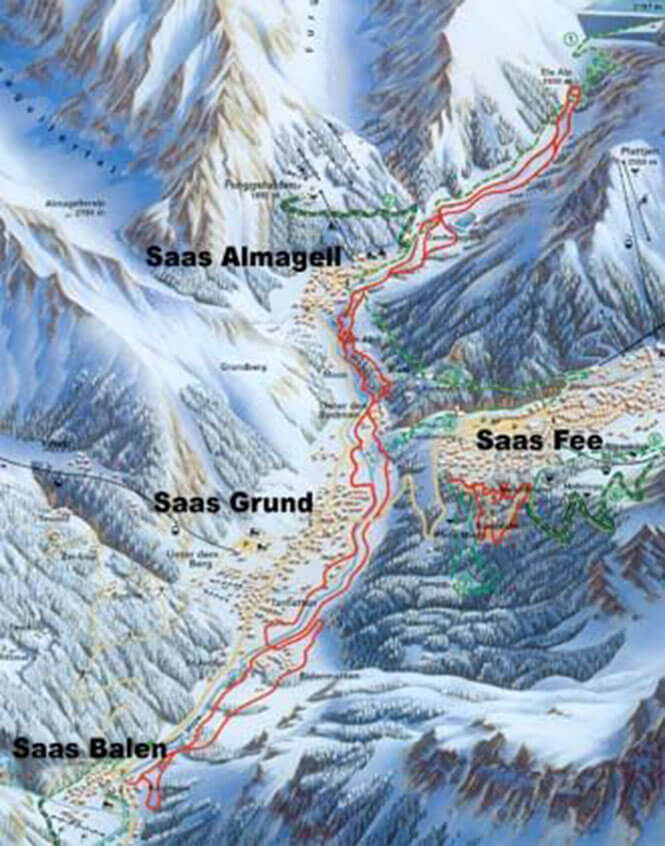