The MOST popular XC Ski in Wisconsin.

The American Birkebeiner Ski Trail, better known as simply the Birkie Trail, is the big game in town and theres probably not another trail like it in the country. Not only is it a single continuous trail of over 50 kilometers in length, it is without question, one of the most challenging nordic skiing experiences to be found anywhere. The Birkie Trail is literally a superhighway of ski trails. It is uniformly at least 30 feet wide and designed to accommodate as many as 3 skiers a breast. Throughout the season it is groomed for both skating and diagonal stride with one set of tracks on each side. The trail runs from the boundary of Telemark Resort in Cable south to Highway 77 east of Hayward. The total distance is about 42 kilometers. The Birkie Trail is the site of North Americas largest cross country ski race, the American Birkebeiner. Annually over 6,500 cross country skiers from across the nation and many foreign countries gather on the last Saturday in February to challenge this trail of trails. The trail is situated on County Forest land traversing portions of Bayfield and Sawyer Counties. In fact, there is a point about 8 km south of Telemark Resort where the county line is actually marked so you know when you are skiing across the county line. Technically (in Sawyer County) it is known as the Sawyer County Skiing and Hiking Trail. But no one ever refers to it as such, just the Birkie Trail. While the land on which the trail lies is county property, the maintenance and oversight of the trail is handled by the American Birkebeiner Ski Foundation. The Birkie wasnt always a nordic superhighway, however. In fact, in 1973when the inaugural running of the American Birkebeiner was held, it wasn t much of a trail at all, but rather a series of logging roads, railroad grades, and other barely marked trails. It was groomed and track set by a snowmobile towing a single skier on alpine skis only hours before the first racers were to pass. The first few years the race was held it wasnt much better. In 1976 Tony Wise, founder of Telemark Resort from where the trail originated, worked with the two counties to develop an actual trail. Nordic guru, Sven Wiik, was called in from Colorado Springs to help design and lay out the course. The real Birkie trail then was about fifteen feet wide and groomed with two sets of classical tracks. With the coming of the skating revolution in the early 80s, the complexion of the Birkie Trail changed dramatically. The trail was widened to its present width in 1979 to better handle the masses of skiers beginning to use skating technique. Much has changed over the past 20 years on the trail itself - widening, changing sections for better flow, redesigned corners, and warming huts at the north and south ends and midpoint of the trail. The Birkie Trail is one of the truly great ski trails of all time. But in reality it almost feels like several trails in one. While it only crosses three paved roads in its 50 plus kilometers, there are several natural geographic dividers along the way which provide skiers logical points from which to choose where they want to ski. It is all moderately difficult to difficult and each section has is own character and distinguishing features. The trail was originally designed to be skied from north to south, that is with the hills and corners laid out to be best descended in this direction. Over the years, however, it has been modified to be equally skiable in either direction. The hilliest sections are in the north, from roughly the Telemark boundary to the highest point on the trail, 1,200 feet in elevation, near the former site of the Seeley Fire Tower, approximately 14 kilo meters south. There is one gut busting hill not far before the Boedecker Road crossing at about 21 km. and another shortly before County Highway OO at approximately 23.5 km. Otherwise, once you pass the high point, though the trail is still very challenging, it becomes quite skiable. South of County OO is some of the most enjoyable skiing on the Birkie Trail. There are still a good amount of hills, but on the whole its a much more favorable grade. The 14 km. section from OO to Mosquito Brook Road probably receives the most skier traffic throughout the winter. About 6km past Mosquito Brook you reach Rosies Field, one of the more famous Birkie Trail landmarks and several times the site of the start of the American Birkebeiner in years when snow conditions did not permit a Hayward start. To reach Rosies you continue to climb and descend including the infamous bitch hill - though short, it is every bit as steep and debilitating as its nickname might imply. The final leg from Rosies is about5-6 km. and includes a significant climb up Hansons hill. It is at this point in the Birkebeiner that everyone finally breathes a sigh of relief, for it is literally all downhill from there. The view of Lake Hayward and the city of Hayward in the distance takes away what little breath you have left. In the race you ski across the highway, a field, and Lake Hayward and finally up Main Street to the finish. But on all other occasions, the trail pretty much ends here at Highway 77.It doesnt matter where you ski, its a safe bet that you will not encounter another trail as physically challenging and as historically significant as the American Birkebeiner trail. While many people prefer smaller, more intimate trails, whether you ski the Birkie or the half-marathon Kortelopet,or just use the trail for touring, its a place like no other and once youveskied it, it becomes part of you.

Where To Go Next 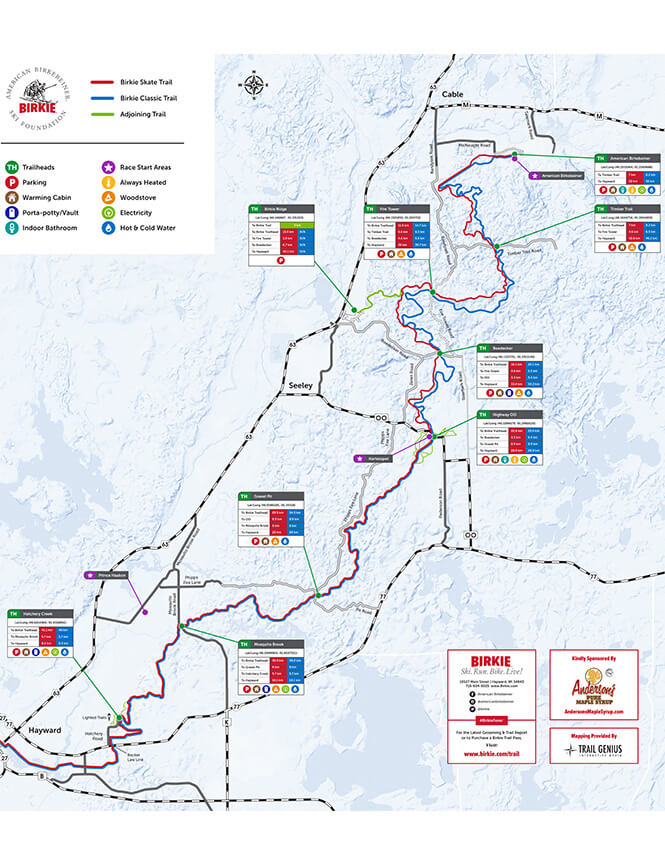